Golfing for a cure

2013 EMR is the lowest in company history

Golfing for a cure

JULY 2014 — The Tee Off for Kids with Cancer Golf Tournament, hosted by the Shining Stars Foundation, was held June 6 on the Front Range of Colorado. Garney employee-owners Alex Engelbert, Joel Heimbuck, Michael Huff, and Nick Campbell were among the golfers at Colorado National Golf Club in Erie, Colorado. Golfers spent the day enjoying scramble play, followed by lunch and awards.

All proceeds from the 10th annual golf tournament benefited the foundation. This organization provides aid to children and their families who are braving cancer or a life threatening illness. The program aims to transform their lives through year-round recreational and social programs. The foundation is currently the only non-profit in Colorado and one of few nationally, which provides long-term, year-round care for the children at any stage in their cancer battle, including treatment, relapse or remission. Activities encouraged throughout the program include skiing, snowboarding, outdoor education, adventure sports, music, cultural and community events, and animal-based therapy.

Explore more information about how you can help the Shining Stars Foundation here.

JULY 2014 — The Water Resources Reform and Development Act (WRRDA) was recently signed by President Obama. Included in the new legislation was a five-year pilot program for the Water Infrastructure Finance and Innovation Act (WIFIA).

The new policy of WIFIA, administered by the EPA under WRRDA, will offer low-interest loans and loan guarantees to public-sector entities for water infrastructure projects. This is a crucial step in funding repairs or rehabilitations to revive the nation’s aging water and wastewater facilities and systems without the need for State Revolving Funds.

Eligible projects must cost at least $20 million, or $5 million for communities serving no more than 25,000. Additional terms to the policy require loans to be repaid within 35 years and limits WIFIA support of a project to 49% of the project cost. This encompasses a general limit of 80% for all federal assistance in any project and entails that tax-exempt debt not be used to pay the non-federal share of the project cost.

The American Water Works Association (AWWA) has been an integral player in paving the way for WIFIA throughout the entire legislative process. Currently, AWWA is encouraging House and Senate support to amend the policy and lift the 49% project cost limit, in addition to allowing the use of tax-exempt bonds. While not all terms sought out by AWWA were initially implemented, this pilot program will significantly change our nation’s water infrastructure needs in the coming years.

More information on WIFIA and its impending impact are highlighted here.

MAY 2014 — Garney Construction was recognized with the KC BEST Award: Small Company given by the Economic Development Corporation (EDC) of Kansas City. The Cornerstone Awards event was held on May 21, 2014, at Union Station with many alumni finalists, city officials and key business leaders in attendance. Tony Kempf, Vice President, was on hand to accept the award on Garney’s behalf. At left, Tony is pictured with Mayor Sly James and leadership from the EDC staff.

In the process of expanding and updating their headquarters office building in Kansas City’s Northland, Garney also expanded its employee size and created new jobs. This caught the attention of the EDC. Garney is honored to have received this award while working in unison with the EDC on the expansion project.

The EDC was established in 1987 as a non-profit agency to serve as Kansas City, Missouri’s link to growth, business and the economic development community. The EDC works with many companies and non-profit organizations in order to maintain a local identity and ensure a vibrant and self-sustaining economy.

Garney’s employee-owners enjoyed a keynote from Pacino, in addition to a live and silent auction, cocktails and dinner. The event, held on March 28 in parallel with National Boys & Girls Club Week, raised funds to support the annual operating budget of five Kansas City Club locations serving nearly 1,000 youth each day.

“I came away from the event knowing there are still a lot of kids out there that need our help and this is a great organization to support.” – Angela Kearney, Employee-Owner Since 2007

The Boys & Girls Clubs of Greater Kanas City strives to support kids, ages 5-18, develop the skills, values and self-esteem they need to reach their greatest dreams. Explore more about how you can get involved with a Club in your area here. 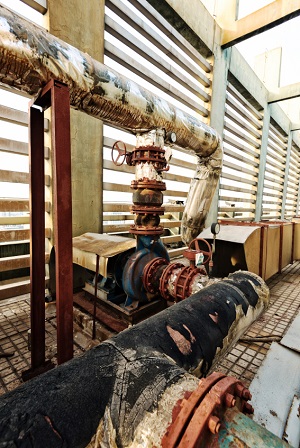 MARCH 2014 — Aging water infrastructure and associated building systems are on the rise; and as a result, have longstanding impacts on the treatment of water imperative to our quality of life. The American Water Works Association (AWWA), in conjunction with likeminded organizations are eager to advance repairs and rehabilitations by lowering the cost of investments for infrastructure projects. The Water Infrastructure Finance and Innovation Authority (WIFIA) concept would aim to do just that.

While ensuring a streamlined approach to financing, WIFIA would grant funds from the US Treasury at long-term Treasury rates. Assistance would be offered in the form of low interest loans. The WIFIA concept would be modeled after the success from the transportation industry with TIFIA and would strive to increase the level of investment in water and wastewater infrastructure.

Currently, the success of WIFIA remains in the hands of those at Capitol Hill with major support from AWWA and the Association of Metropolitan Water Agencies (AMWA) and the Water Environment Federation (WEF).

As many projects often lack aid from State Revolving Funds, WIFIA would offer a drastic change in water infrastructure for communities around the nation. Learn more details about AWWA’s stance on WIFIA and the capability of its tremendous impact here. 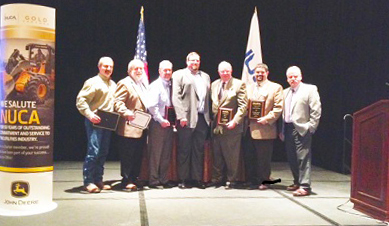 MARCH 2014 — On March 3, Garney received the award as the overall winner for the prestigious 2013 National Utility Contractor Association (NUCA) William H. Feather Safety Award. Of the six different categories broken down by man hours and presented with awards, Garney received the Overall Winner category defined as exceeding one million man hours. This honor recognizes Garney for making the commitment to safety their number one priority.

The award was established in 1978, in honor of William H. Feather, one of the founding chairmen of NUCA’s Safety Committee. The award is separated into six categories based upon the total man hours worked for each construction firm. NUCA also takes into consideration the construction firm’s Experience Modification Rate (EMR), incidence rates, safety statements, and safety program implementation. Garney has consistently been far below the industry average for EMR – a remarkable safety achievement in the utility construction industry.

Safety is a core value and an integral part of Garney’s culture. Garney’s Health & Safety Program provides their employee-owners with the tools, knowledge and resources needed to safely accomplish their work as well as protect clients, subcontractors and the general public.

Prior to the start of all projects, a Job Specific Safety Analysis is prepared to address the hazards and risks of each individual project. A Pre-Job Safety Conference is held with management and key crew leaders to plan an approach to addressing these risks. Every Garney employee-owner is required to adhere to the company’s safety guidelines. From the early planning stages of a project through completion, Garney is committed to being a safety leader in the construction industry.

FEBRUARY 2014 — David Lustig, General Superintendent at Garney Construction, has been sworn in as the 2014 President to the Colorado Chapter of the National Utility Contractors Association (NUCA). He has been an employee-owner at Garney for the past 23 years. David’s goals include, “building on the strong foundation of the past three presidents, growing membership by taking advantage of the growing economy, increasing participation by encouraging members to attend regularly scheduled NUCA events, making NUCA a first choice for safety training, and demonstrating to non-members the value of networking at NUCA.”

David began his career at Garney as a Project Administrator and worked his way through the ranks to the position of Assistant Project Manager and then General Superintendent. David is responsible for directing all daily activities of employees and subcontractors. He monitors the work performed on projects and controls the quality of all portions of the work. He is currently working as General Superintendent on the Northern Treatment Plant for the Metro Wastewater Reclamation District in Brighton, Colo. David has a good reputation in the industry as being a safety conscious professional, hardworking and demanding, for which he will be a successful and strong leader of the Colorado Chapter of NUCA.

DECEMBER 2013 — Garney’s T-Bar Ranch Well Field Development & Delivery Project won a Design-Build Institute of America (DBIA) National Merit Award for 2013. The project will be highlighted at the DBIA National Conference in Las Vegas in November. This project includes the design and installation of 60 miles of 48″ steel and C303 water transmission main and 21 miles of well field piping in just 12 months.

To be considered for a National Design-Build Project Award, projects must demonstrate successful application of design-build best practices as defined by DBIA’s Design-Build Manual of Practice.

This includes early integration of key team members and close coordination between design and construction team members from the design-development stage through construction. For 2013, DBIA added a section pertaining to team performance.

2013 EMR is the lowest in company history

JULY 2013 — Garney’s 2013 preliminary EMR has been issued at 0.53, which is the lowest EMR in our history. An EMR this low is extremely hard to obtain for a company that works in so many states. The more states a company works in, the harder it becomes to drive down the EMR due to the way the NCCI rating formula works. Garney’s ongoing corporate emphasis on safety, spearheaded by Jamie Blystone, Neal Timmons and Ryan Smith, has played a key role in these results. The added focus of the company and our crews on safety has allowed us to lower our accident incident rate, which has a positive impact in helping the company lower its EMR.

MAY 2013 — While many businesses in Kansas City are still floundering from a hard year and a difficult economy, Garney Construction has had one of its best years yet. The Kansas City Business Journal has awarded Garney with the Champions of Business award for the second year in a row.

Garney acquired Encore Construction, in Winter Park, Fla., in late 2012 and picked up three large projects across the country as well. The company’s total gross revenue for 2012 was $494 million, and they acquired $714 million in new projects from 2012.

The new projects Garney will be working on are in Texas and Colorado. In Midland, Texas, Garney Construction will be working to build a $155 million water pipeline. A new $305 million pipeline is also being built northwest of Dallas. Garney will also work with CH2M Hill to design and build a $254 million water treatment plant in Denver, Colo. that is scheduled to be completed in 2015.

Garney Construction hopes to continue their success in 2014 and beyond.